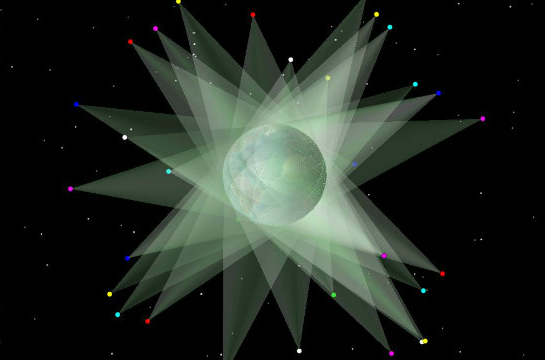 GPS is the first Global Navigation Satellite System (GNSS), which provides very accurate positioning and velocity information everywhere on the planet. By sending timed signals toward the Earth from over 30 satellites in space, a receiver you own can determine your location to within a few meters. With additional aiding, reference signals, or data processing, locations can be determined within centimeters.

Each GNSS satellite transmits a navigation signal. That signal is essentially a measuring stick, allowing your GPS receiver to measure the distance to that satellite. When you track at least four GNSS satellites, your receiver has enough information to determine your location and speed using common navigation algorithms.

Interestingly, GPS is the first system to require the use of both relativistic and quantum physics; encompassing the realms of the very big and the very small. Relativity plays a role because the navigation signals used are transmitted from space, quite a distance from the Earth. Relativity predicts that these signals must be adjusted slightly to account for the lower gravitational potential there. Quantum mechanics comes into play to help keep the on-board atomic clocks precise to within a few nanoseconds. Without both of these effects accounted for, GNSS accuracy would be much worse.

What GPS Is Not

For the record, GPS does not do the following:

Other applications using the GPS chip in your phone or other gadget may do exactly those things, but GPS does not.

Gps Basics
The basics of how GPS works with some technical content.

How Long Can You Use an Almanac?
GPS position data is contained in almanac files. Learn how long you can use these for analysis.

Selection of my published papers

Understanding GPS Navigation in Contested Environments
Review of GPS errors, their source and how we can mitigate them. Review of terrain datums and their operational usage and an overview of alternative navigation techniques.

Operational Considerations for Improved Accuracy with an IOC Galileo Constellation
This paper looks at how the Galileo operators can improve the performance of an initial Galileo constellation by managing their ephemeris and clock errors. Keeping those errors small can help keep initial positioning errors small, even when large DOPs are present.

Long term prediction of GPS accuracy - Understanding the Fundamentals
Topics on prediction methods for GPS and how long GPS errors can be predicted. Starting from an understanding of the elements of prediction, including almanac use and ephemeris and clock errors, I look at the statistics of GPS position error predictions under various scenarios.