I occasionally write fiction as well as technical papers. This is something I wrote over a few days in July. Here's an excerpt: 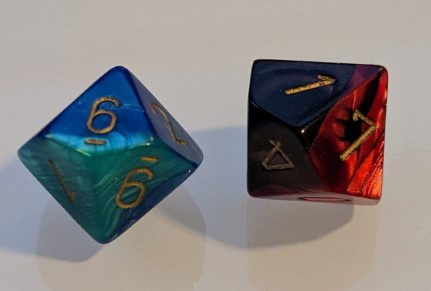 “So, how do I get to the other hemisphere?” Jake asked.

“That’s easy. If you roll between zero and four, that’s a minus sign, and between five and nine that’s positive.” Rann said, explaining the rules.

Jake rolled a three. “That’s in the southern hemisphere,” Rann stated, having figured out how to do this only hours earlier. Rann found the dice in a game store where 40K models were sold. He was interested in 40K, but nothing caught his eye today. He perused the other merchandise and came upon a whole shelf of dice in different size containers. Wooden boxes with normal, square dice. Plastic containers of gamers dice – with four, eight, 10 and 20 sides.

While looking at the 10-sided dice, Rann experienced … something. The soft voice he heard urged him to pick the red and black die, and the blue and green die. Both were beautiful. Their shimmering colors coalesced into silky swirls, then frozen into 10-sided objects not much bigger than a key on a computer keyboard. When Rann picked them up, he felt like he’d just finished a big meal, or a good book. The dice felt satisfying and warm, and they had a good weight. He felt complete holding them. Except…

Global Navigation Satellite Systems provide location data to devices around the world. The foremost of these GNSS systems is the Global Positioning System - GPS. I've got GPS status, accuracy and outage information on this site - dive in and see what's there.

Our current view of reality is based on what we observe and the results of experiments. See what odd behavior these constraints demand we experience.